"Where else in Quepos or Costa Rica can you go fishing with an American Captain on a 30 foot boat for 850 bucks?" 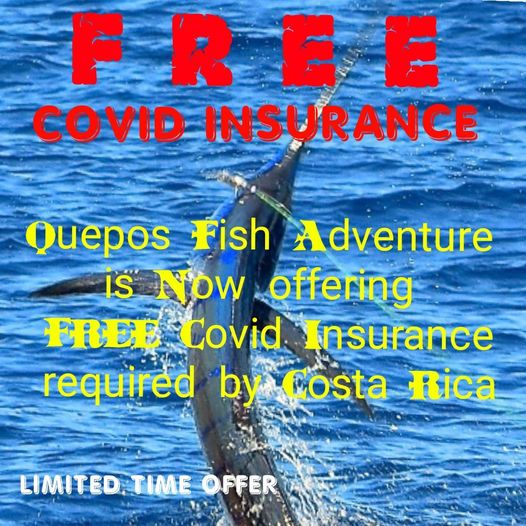 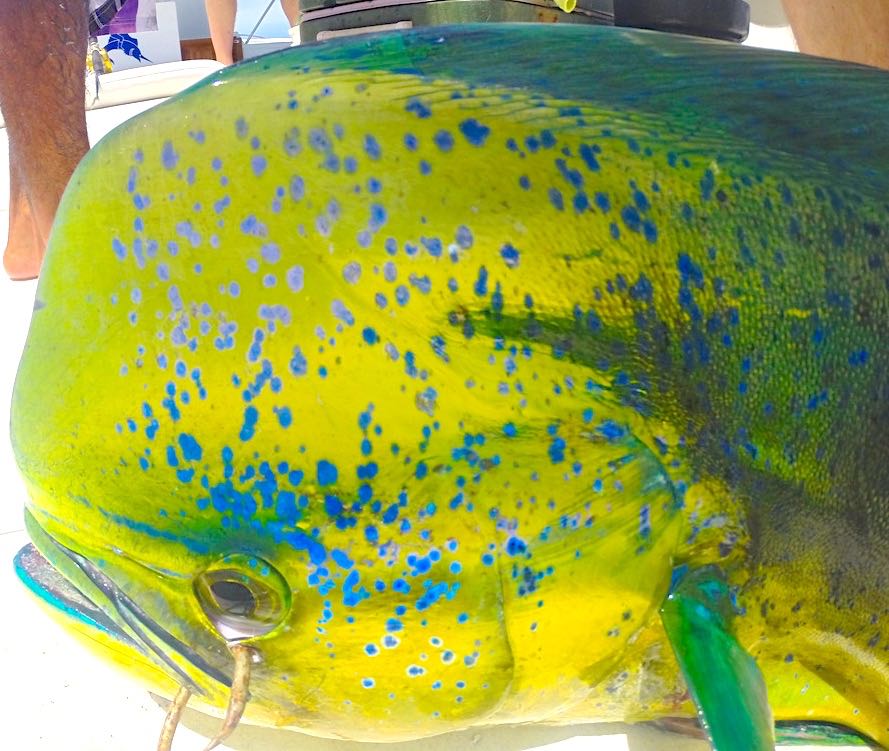 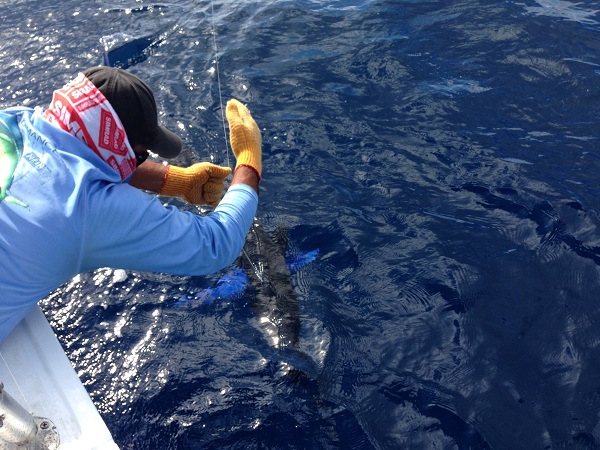 We are finally open again for business! We can get you in super easy, with NO COVID TEST, and right now the fishing is on FIRE! Costa Rica oficially opens its borders to all 50 states November 1st, and after a little back and forth they have taken out most of the difficult tourist requirements they were going to implement. What is left is super easy and we can help you get everything in order for an easy entry! 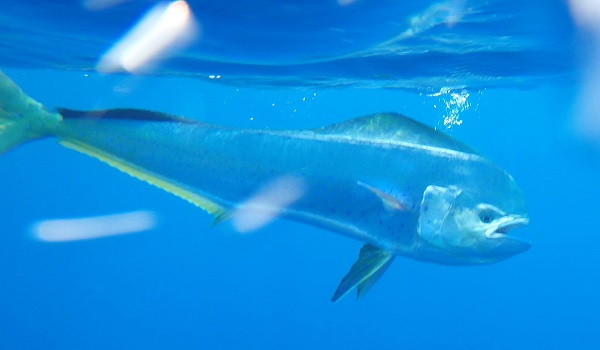 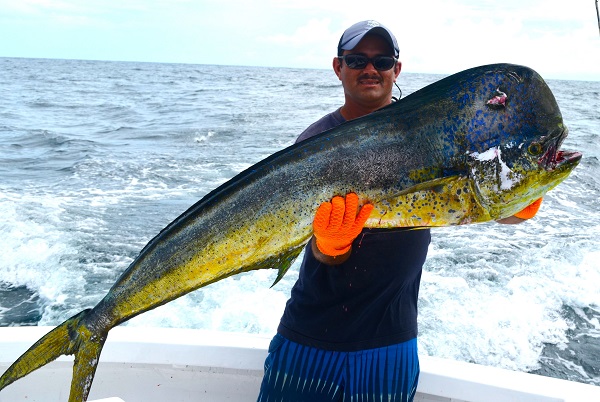 Yes we're still here! Yes we're still fishing and the bite has been spectacular. Double digits of sailfish and yellowfin tuna are the common theme, it's been a few years since we've had this great of a sailfish bite this late in a year. The yellowfin tuna are still under the "spinner" dolphins which is an amazing sight in its own. The tuna are continuously getting bigger and bigger every year. The average catch being around 60 lb with several over a hundred pounds coming to the dock each day! Large Marlin are mixed in, as well, catching and releasing 3 to 4 a boat, per week. Mainly blues with the occasional black mixed in. The seamounts "FAD's" have been overwhelmed with large blacks and blues, as well as 100 + pound yellowfin tuna!! Mahi-mahi are starting to show up, "schoolies" mostly, but a few gaffers mixed in. Which is exciting and very encouraging for our upcoming big mahi run!! 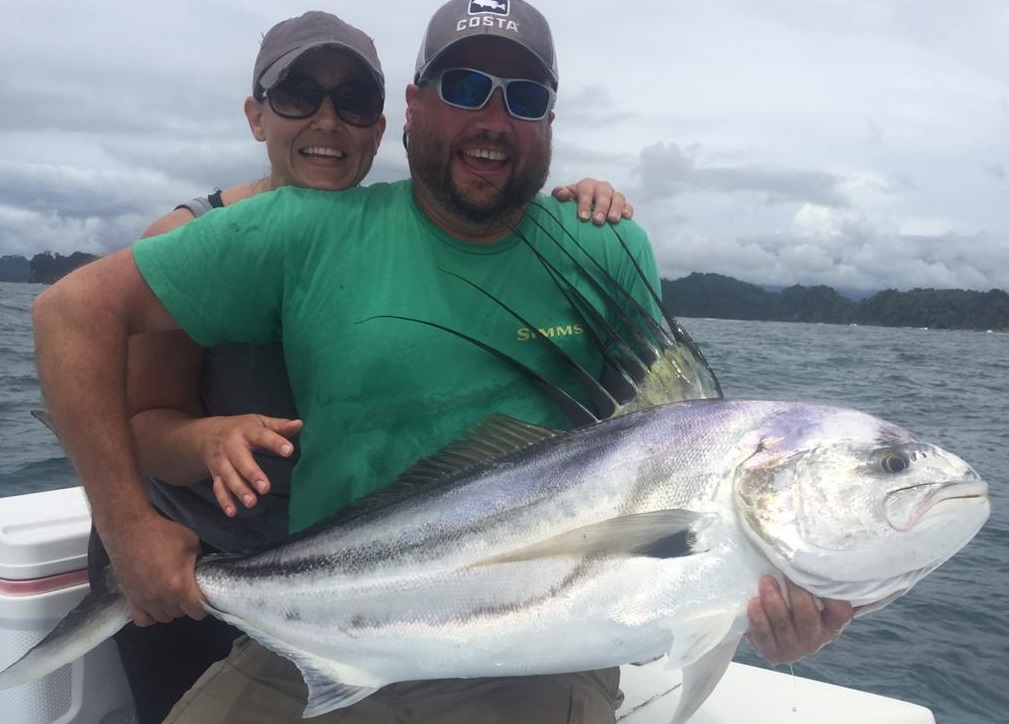 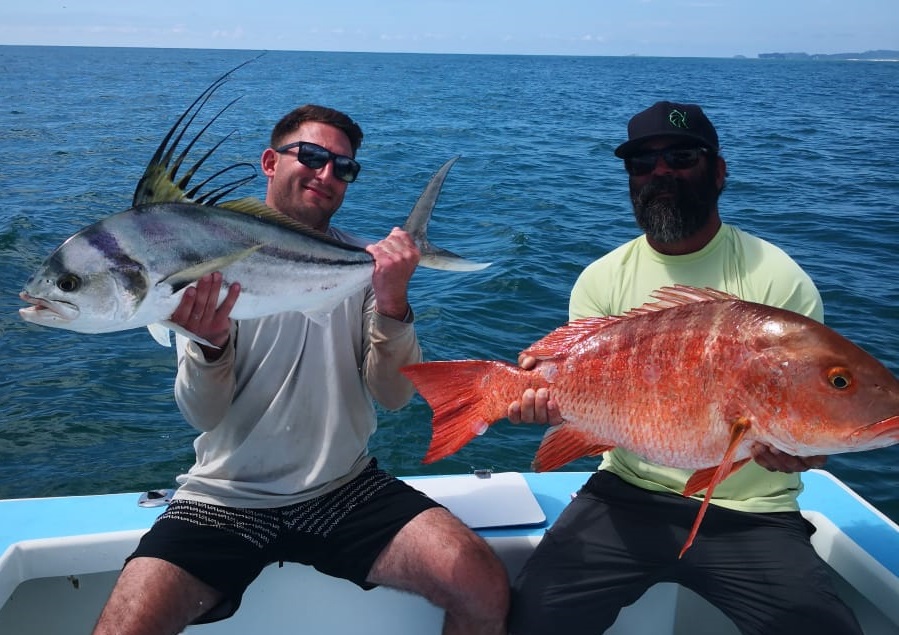 Inshore fishing has been really good lately! We have been doing a little bit of deep dropping to get the customers filets to take with them, and then there have been some nice roosters and snappers around too! Bait has been pretty good, our night guy has been coming through, and then there are some blue runners out on the rocks in front of Quepos so we can mix it up with the bait. Great inshore fihsing here in Quepos Costa Rica! 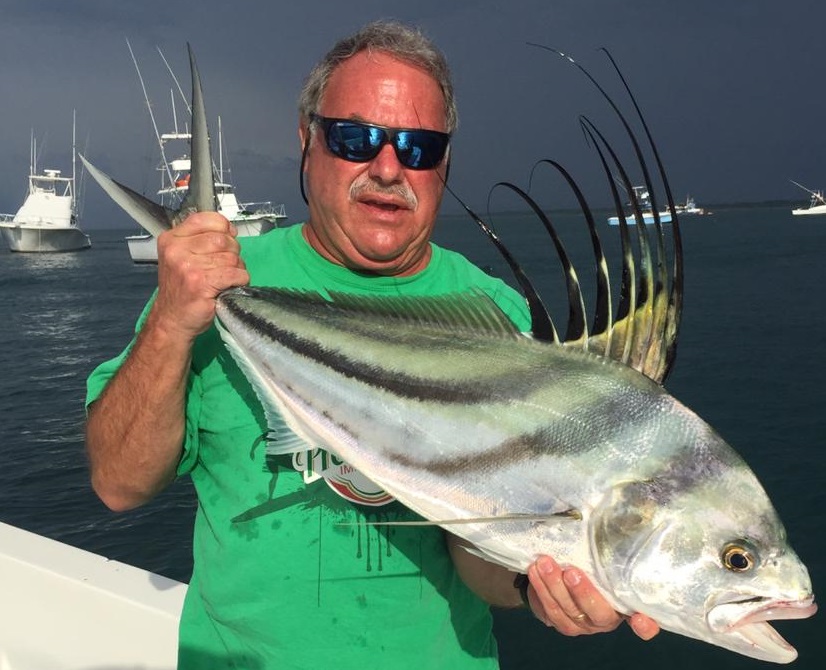 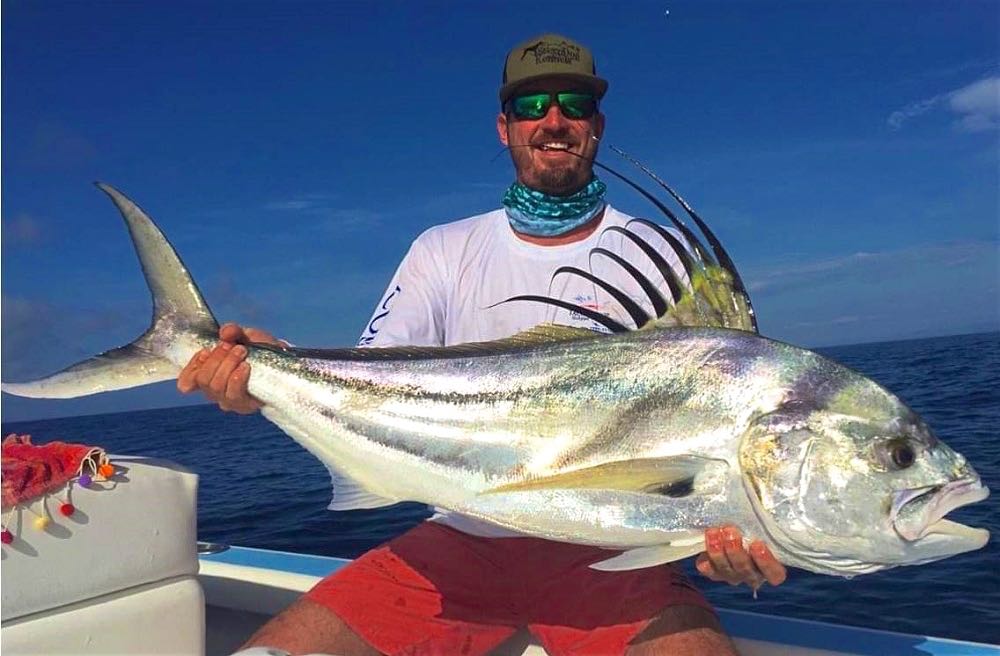 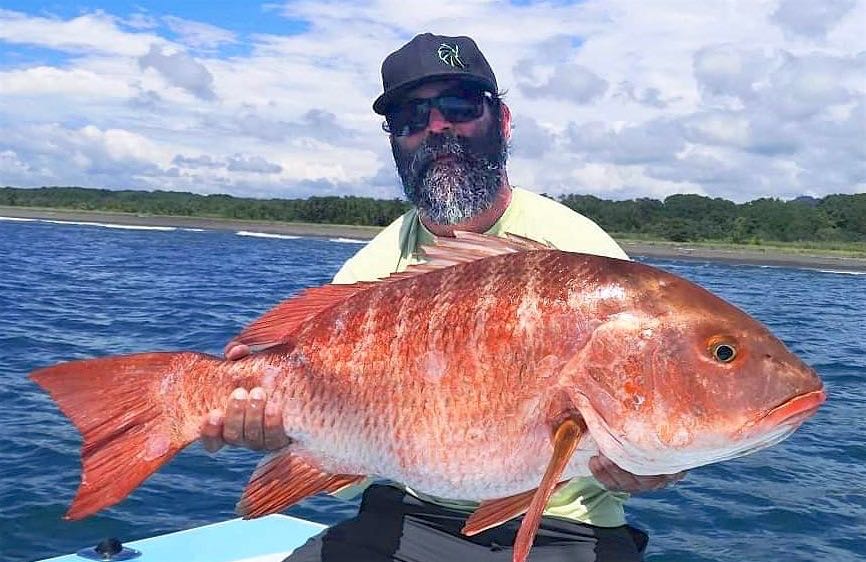 Inshore fishing has been fun lately. There have been some really nice Roosterfish around, and then we have seen some snapper and snook as well. There have been a ton of sardines around as well, so we have been starting with some nice lookdowns and then having the option to switch to sardines if needed. Been some great inshore trips out here lately in Quepos Costa Rica! 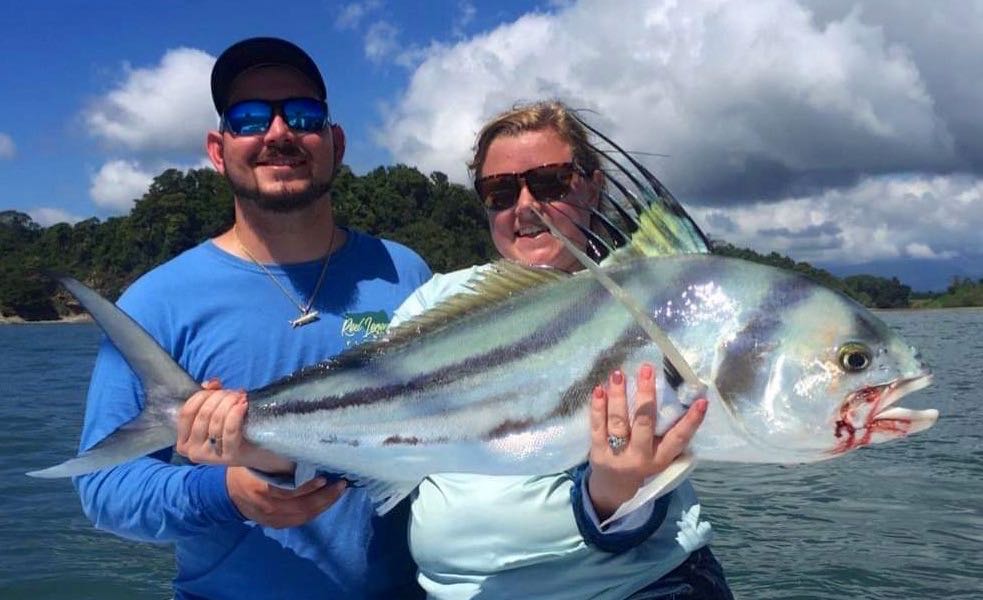 Cool Video From One of our Customers

This year has been the best year so far for Yellow Fin Tuna since we started fishing in Quepos 10 years ago. Almost every trip out there we have been seeing the big schools of Yellow Fin Tuna, with all the spinner dolphins and birds. Really an amazing thing to see, and it's a ton of fun catching the Yellow Fin Tuna as well! Average Yellow Fin Tuna has been probably 50+, but we have gotten several over 150 pounds as well. We are seeing sailfish out there almost every trip as well, not in huge numbers but we are devoting lots of time to the Tuna usually, so if sails are the goal we can spend more time looking for them. Lots of Marlin around lately, and then there is a good shot at Dorado as well. Last year we saw a huge run of dorado in October to December, so if those months work for a trip and you wanted Dorado, you can get some really big ones! Daytime weather is usually always sunny here year round. We get strong night rains from May to November, but that's almost always after we get back in and before we leave. Usually the harder the night rain, the prettier the days. We will have some great times here fishing offshore in Quepos Costa Rica!

Inshore has been great lately. There have been big schools of sardines out there, and sardines are the best thing that can happen to inshore here in Quepos! We usually start the day off with some lookdowns that Johnny's dad catches overnight for us, and then in the morning we set off to get the sardines as well. With the full live well, the guys will either run to a river mouth, or head to one of the honey holes in front of the beach, and we are seeing big snook, snapper, roosterfish, and grouper. We have also been seeing some seabass lately. Been lots of numbers, and lots of big fish. Great inshore fishing here in Quepos!

Giving you the best fishing experience for your dollar, providing a top notch experience at both inshore and offshore fishing sportfishing in Costa Rica. We are very centrally located in the Manuel Anotnio / Quepos area of Puntarenas Costa Rica, only 45 minutes South of the Los Suenos sportfishing marina in Herradura / Jaco. We are also a short 30 minute drive from most of the Exquisite Vacation Homes located in the Dominical, Uvita, and Whale's Tale areas. Our focus is sportifshing for Sailfish, Black Marlin, Blue Marlin, and Striped Marlin. We also catch other offshore and inshore species including Dorado, (aka dolphin, Mahi Mahi) yellowfin tuna, amberjack, snapper, and rooster fish.